When people visit Canada or choose to travel within the country, the obvious list often includes Ottawa’s parliament building, Toronto’s Manhattanism, or the majestic Niagara Falls in the East, and Alberta’s straight-out-of-heaven Banff national park, Vancouver’s beach-and-mountain combo or Yukon’s Arctican polar bear/aurora gazing in the West. Amidst such English flair and polar beauty, the province of Quebec in Canada serves as a welcome piece of French Europe in North America.

From cobble stoned streets to the dominant Quebecois French culture to an architecture that reflects the French tastes, the province offers a great escape to the colonial era without leaving this side of the Atlantic. The charming Old Quebec City and the more cosmopolitan Montreal are the province’s prominent cities, with the former having originated as far back as the beginning of the 17th century, making it one of the oldest cities in North America. Here we present a bite-sized itinerary to cover the best of these two cities - a perfect idea for a long weekend.

By road, Montreal is roughly 3 hours from Ottawa and 6 hours from Toronto. You can also choose between ViaRail train or Megabus/Greyhound bus services, or a flight if you’re traveling from further away. The best way to get to Quebec City is another 3 hour drive by car or Orléans Express bus from Montreal.

We headed out early on Friday from Toronto to reach Montreal by early evening, and checked-in at an Airbnb in the Ville-Marie neighbourhood which was decently close to the downtown core. As we began our trip, we found the area house a surprisingly beautiful little park called Esplanade Ernest-Cormier with curious sculptures and low-hanging apple trees that made it difficult to not pluck one or two fresh ones!

As you head towards Old Montreal, begin at Place D’Armes, a square opposite the Notre Dame cathedral. With horse carts awaiting and musicians adding a little pep to the experience, it is a great way to get officially started with the weekend. Close to the cathedral on Notre Dame St West is a refreshingly cute cafe called Tommy Cafe. The vine-decor and stairway seating invite you to pause-and-sip on some caffeine. We obliged as there was some time to kill for the Aura light show that was to begin in the cathedral. Check before your trip if the light show is on play when you’re in Montreal as it’s a definite not-to-miss. Given our infatuation with the Lightshow we had caught at Disneyland Paris, we were rather smitten by this one.

Notre Dame cathedral lies to the east of Tommy Cafe, and it’s a direction you should continue walking in once done. On the way, you’ll find the tall-columned Courthouse. Feel free to zig-zag your way through the alleys to catch curious shops and cafes. They offer some of the best of the city. Our next pit-stop, though, was on a straight line to Place Jacques-Cartier, which serves as an entrance to the port of Old Montreal. Opposite this square is the park-like Vauquelin Place but we decided to turn towards the port and soak in the many restaurants and performances on the glitzy stretch.

Our dining spot, on recommendation, was Jardin Nelson. With live music and food that will not disappoint, you can easily spend a couple of hours here. Their french onion soup is to swear by. It’s always busy but tables are relatively quick to get. Make reservations nonetheless if possible. 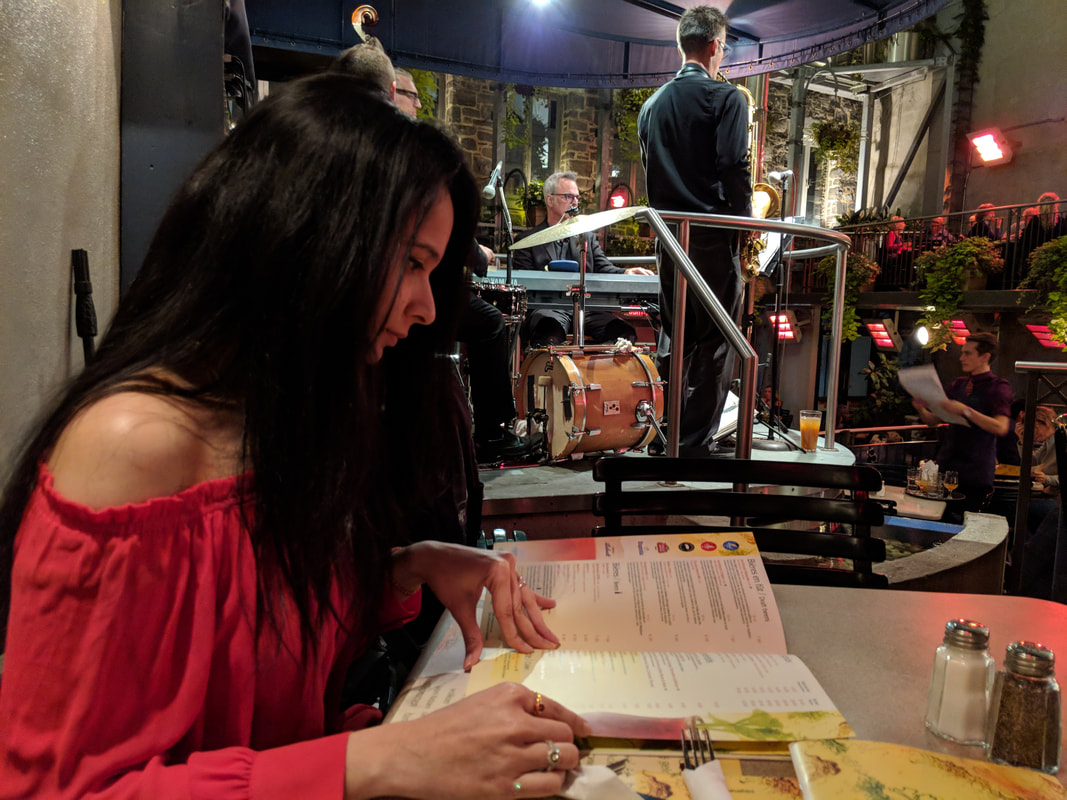 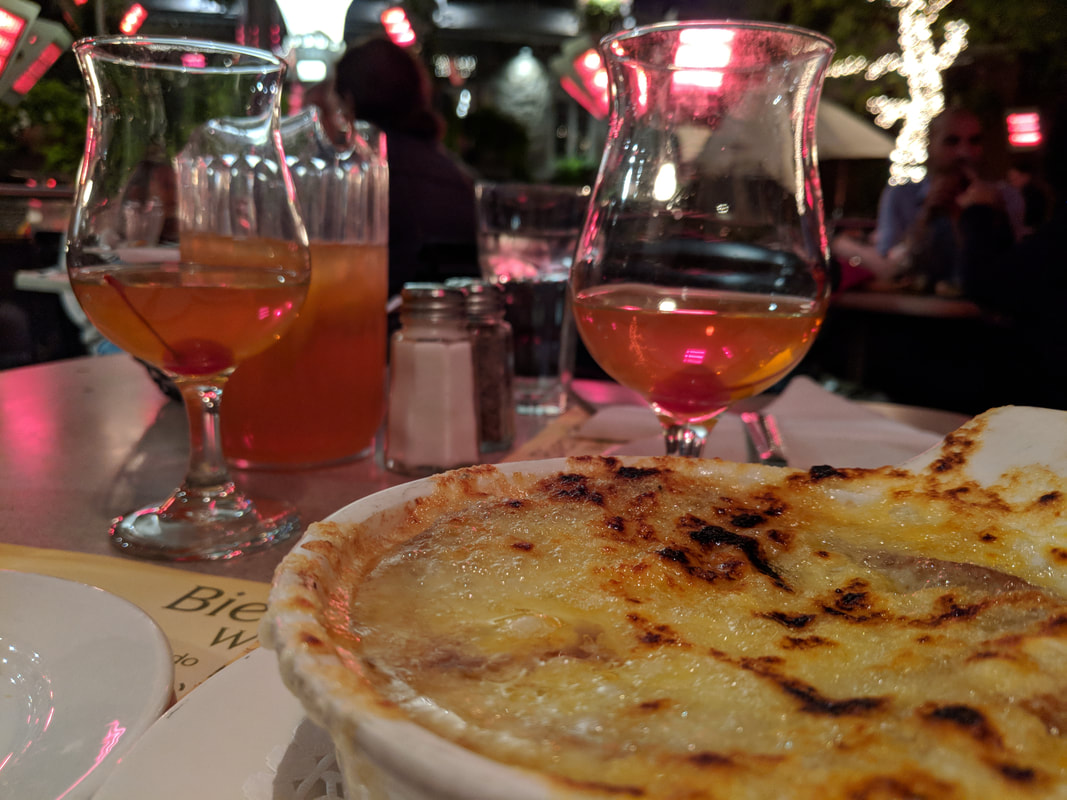 Post dinner, we continued our walk to the port and then westwards along the stony pathway for a fair distance until we turned back into the alleyways. If you so choose, there are a bunch of petit French restaurants you’ll come across if you were to walk westwards from Notre Dame, particularly on streets like Rue Saint-Pierre. For those wishing to explore delicious Vegan concoctions, try out LoV at McGill & Rue des Recollets.

Take an early morning bus to Quebec City, a 3-hour drive. As you arrive and check-in by brunch time, the obvious thing to do would be to hit the old town as soon as possible. We, however, recommend patience. If the words nature, escape, zone-out, spa or unique experience resonate with you, take a cab to Siberia Station Spa - approximately 30 minutes out of town. For a very affordable price, you’ll experience the Nordic therapy of subjecting your body to cycles of hot-cold-rest. On offer would be everything from hot stones, saunas, infrared and steam baths, to cold fountains, river baths, to swinging couches, hammocks, outdoor fireplace and riverfront beds - all completely surrounded by the forest and rich with natural sounds of rustling leaves, flowing river and chirping birds! You can eat at the cafe there too. Read our post on the subject to learn more.

Whether your trip starts immediately on arrival or towards the evening does not matter too much because Old Quebec City is a pedestrian paradise equally well served during daylight and in the charming glow of nightfall. The walking tour of Old Quebec City, spreads out in two directions from the focal point of Place D’Armes square. The first will take you towards the princely Fairmont Le Chateau Frontenac and a gorgeous river-view. If you’re visiting in snow, there might be a snow tubing experience on offer steps away. If not, or once done, make your way downhill to Rue du Petit Champlain. Little shops dot the lanes, as do place to munch. Soak it all in. You may ride the funicular up and down the hill, but we found walking it all out worth the experience. Oh, and there is also a Notre Dame close by, at Royal Place.

Back up the hill, the next part of the walk continues in the other direction from the square Place D’Armes. We recommend taking the Rue De Buade as you’ll come across great shops, including a Christmas heaven, sure to fill you with joy. Keep strolling as the streets unfurl surprises every now and then. One in particular that caught our fancy was a park behind Hotel de ville (City Hall) that had a mesmerizing colourful dance of water fountains. You can sit on the steps in quiet surrender to the moment for as long as you wish. But before you get into that, make sure the tummy’s happy as places to eat can close early. 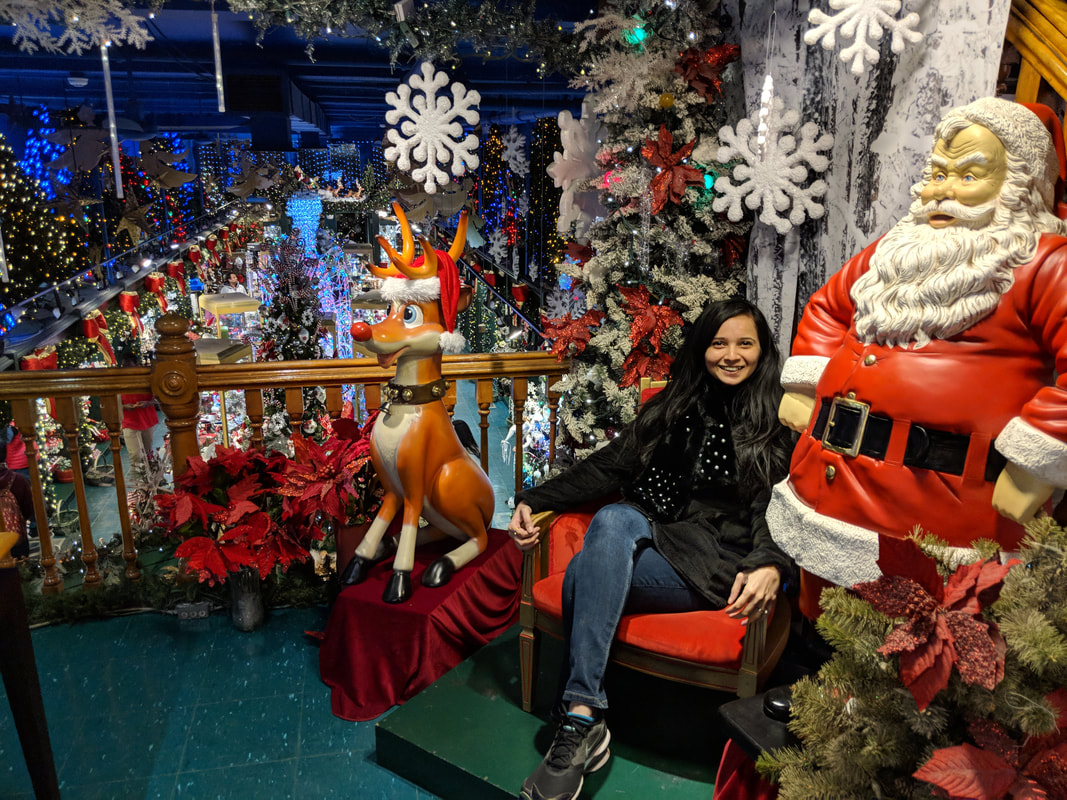 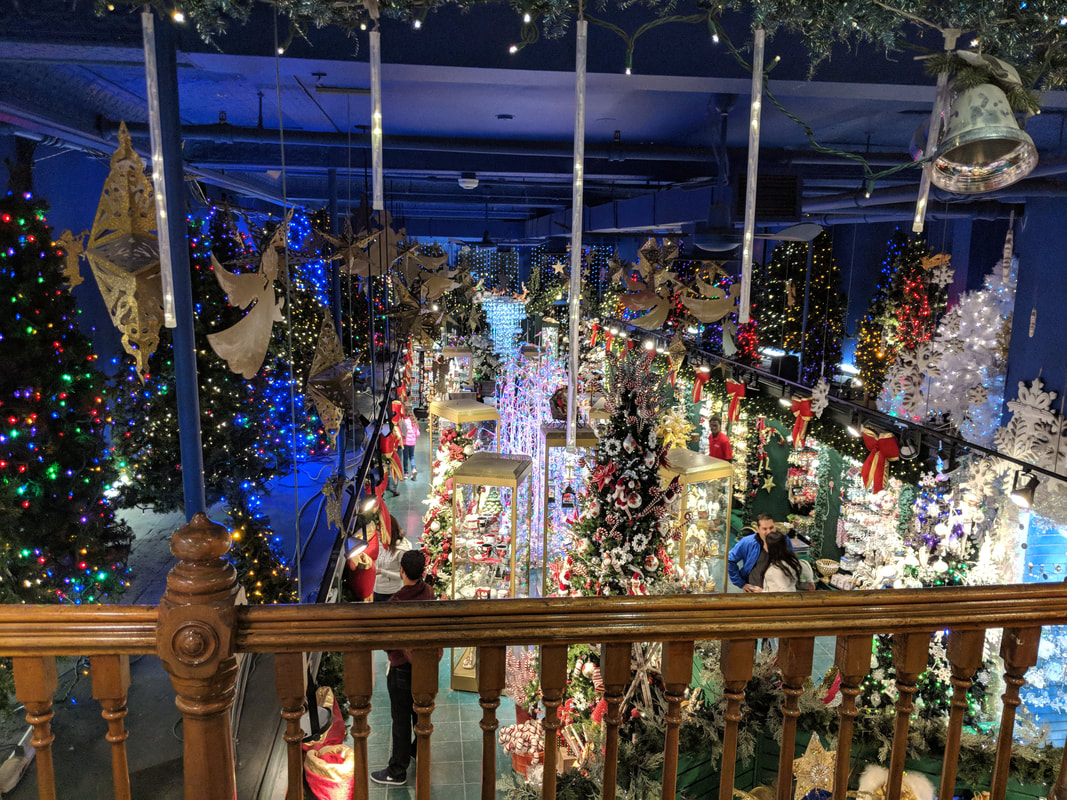 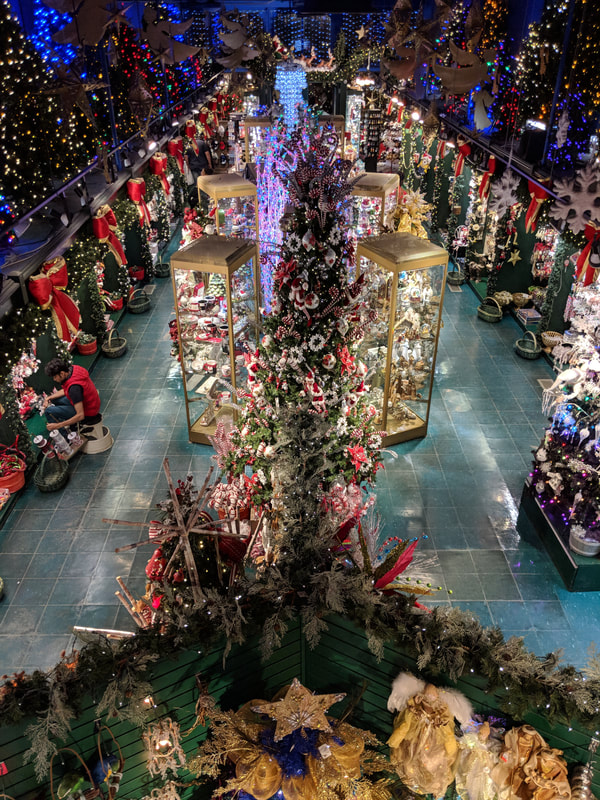 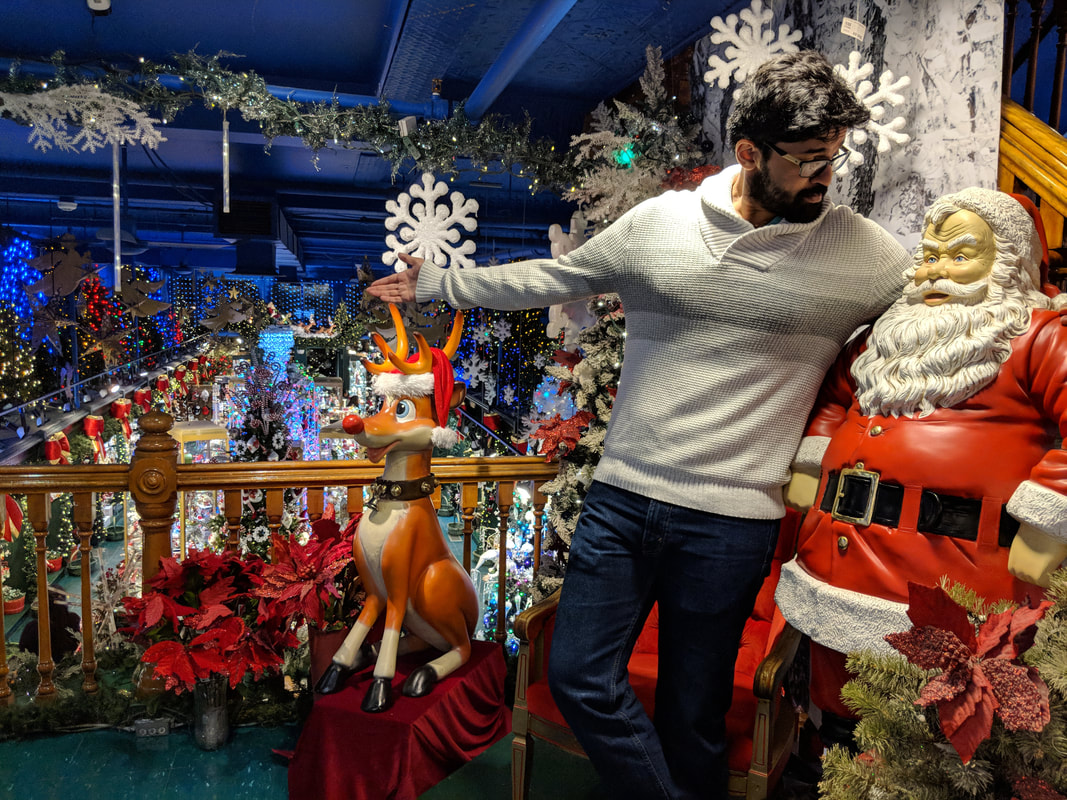 For dinner, an interesting spot to grab a bite could be the pretty village-y Aux Anciens Canadiens on Rue Saint Louis, close to the famed Fairmont hotel. If you find it too busy, feel free to try one of the other restaurants on this street - they may be still less crowded than the more commercial ones dotting the other side of Place D’Armes (the main square in the vicinity). We picked a quiet, cozy one with a live guitarist.

The return journey from Quebec City to Montreal to wherever, can be tiring if done at a stretch. This is why it is best to keep the better part of a day dedicated to this. Our pit stop in Montreal was a romantic and exclusive candlelit show by a budding musician, that we had found on Airbnb experiences. (We certainly hope to see him on the cover pages in a few years.) The return journey would also offer a great chance to squeeze in one more round of Montreal’s alleyways, because there will always be ones remaining to check-out. Just get home in time to rest before the work week begins!

A Day in Uxbridge - The Trail Captial of Canada